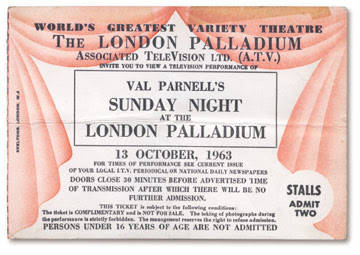 October 1963 was a pivotal month for The Beatles; already firmly ensconsed atop the British pop scene, their appeal began to expand to other arenas and markets.
On the 13th, they performed live on the prestigious ATV series Sunday Night At The London Palladium. Backstage prior to the show, ITV News interviewed them about their remarkable popularity.
Just two days later, it was announced that they would perform for the Queen Mother and Princess Margaret at the Royal Variety Show in November.
By the time they returned from a successful Swedish tour on October 31st, interest in The Beatles was at a new high. There to greet them at London Airport were hundreds of fans, in the first of many hysterical airport scenes. Also present were BBC Radio's Reg Abbis, who filed this report, and ITV News, who interviewed fans about The Beatles' appeal. Another witness to the airport mayhem that evening was Ed Sullivan, but that's a story for another day...
Posted by DinsdaleP at 3:24 PM