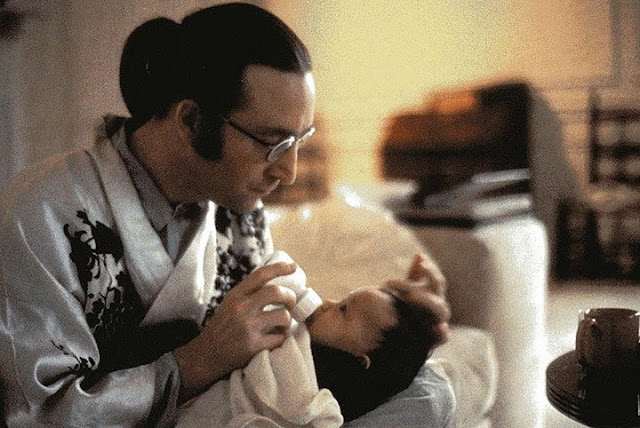 On November 23rd, 1975, Derek Taylor, now managing director of Warner Brothers Records in the UK, sent a semi-serious letter to John Lennon at the Dakota, asking him to sign with the "very reasonable and extremely rich" label.

By this time, John was truly relishing his role as a stay-at-home father to Sean, and had no intention of signing with anyone when his EMI contract expired in January. On December 11th, friend and photographer Bob Gruen was invited to the Dakota to shoot the first professional pictures of Sean with his parents.

Around this time, John received a request from WNEW disc jockey Vin Scelsa, who was assembling a radio tribute to New York City, which was suffering from major financial problems. Scelsa mailed a questionnaire, along with a tape and recorder for John to return with his responses, to the Dakota. John duly replied, sounding disinterested and drowsy.

In contrast, John was downright goofy when he used the same questionnaire as a springboard to record the first-ever "interview" with his two-month-old baby. Unsurprisingly, Sean has little to say about New York, cab drivers, or a balloon mishap during the recent Macy's Thanksgiving Day Parade (actually Underdog, not Snoopy), only becoming agitated when his godfather Elton John is mentioned.

Bob Gruen was also present just before Christmas when two surprise guests showed up at the Dakota:

"There was a big flash of paranoia when the doorbell rang. It was like, ‘Oh my God, who can that be?’ In the Dakota, every visitor gets announced from the desk downstairs, so when the bell on your apartment door rings suddenly, it's a real fright. It wasn't just a little paranoia - they were very scared, very nervous.

They said to me, ‘Go see who it is, don't open the door until you know what's going on,’ and I went to the hallway and I heard what sounded like kids singing Christmas carols. So I called back to John and Yoko, ‘Don't worry, it's some kids from the building singing carols,’ and when I looked through, it was Paul and Linda. They were singing ‘We Wish You a Merry Christmas’, very cute, kind of adorable, just standing there singing.
I said, ‘I don't think you're looking for me; come on, I'll take you into the bedroom where John and Yoko are,’ and they kept singing all the way in. You know, you read about all the animosity between them, about how the Beatles' wives don’t get along, but they all seemed like giddy old school chums. Hugging, patting each other on the back, the guys were like high-school buddies who hadn't seen each other in a long time and really liked each other. The girls were very chatty and pleasant. If you didn't read the magazines, you wouldn't know Yoko and Linda were supposed to hate each other, they were getting along just fine. They all went into the next room to look at Sean, who was just two months old.
Paul told them about the pot bust in LA and how they'd been denied a Japanese visa, and how much he and Linda wanted to go to Japan. John and Yoko really loved Japan and went there a lot, so they talked about that. It was all pretty general, nothing about any business between them, and then when they got up to leave there was lots of hugging and kissing, general holiday good cheers. It was so fascinating seeing the two of them together like that with their wives, and everything totally pleasant.
After they were gone, John and Yoko were saying, ‘Wow! Do you believe that?’ And they seemed to be so happy about the visit. Whatever fights were going on between their lawyers, they knew each other too long and too well not to be glad about seeing each other."

Posted by DinsdaleP at 2:51 PM