The Wonder Of It All 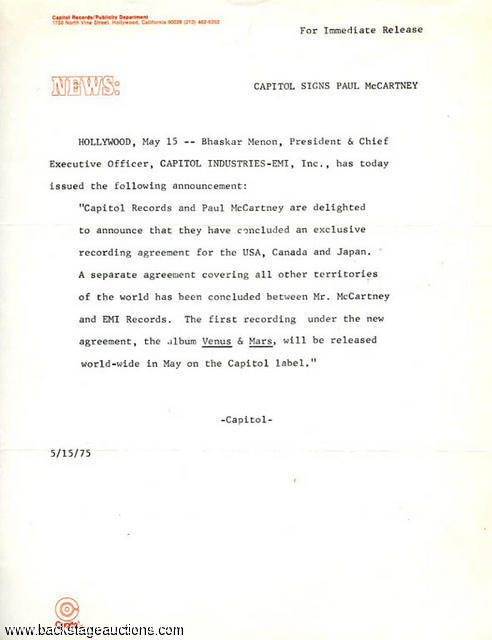 With the Beatles' EMI contract due to expire in January, 1976, the company was eager to hang on to as many of the band members as possible. Paul was the first (and only, as it turned out) to re-sign, and the day after it was announced, he issued a new Wings single in the UK. The catchy "Listen To What The Man Said" was a big hit, peaking at #6 in Melody Maker, and giving Paul his fourth US #1 on Billboard's chart.

The album which followed, Venus And Mars, came out on May 27th, 1975 in the UK, and three days later in the US, accompanied by a TV commercial filmed in a billiards room at Holland Park:

In 1974, Paul and Linda had purchased Waterfall, a cottage on a farm in Sussex; they moved in and spent much of May and June rehearsing with Wings at the Ealing Cinema in Rye, in anticipation of an autumn UK tour.

To promote the LP, Paul chatted with Paul Gambaccini in St. James' Park for a Rolling Stone feature article. Portions of the interview were syndicated on American radio for the Rolling Stone News Service. Venus And Mars would prove to be another best seller, certified gold in the US on June 2nd and topping the US and UK charts by July.

The third single from Ringo's Goodnight Vienna LP was released as in the US only on June 2nd. It was actually an edit of the album's title track and its reprise, and struggled up to #31 in Billboard, Ringo's poorest outing since 1970's "Beaucoups Of Blues".

Around this time, Ringo taped a guest appearance on the TV special The Hoyt Axton Country Western Boogie Woogie Gospel Rock And Roll Show. Axton had written Ringo's most recent hit, "No No Song", and the two joined a typically disparate cast of mid-70's celebrities in a performance of the tune. The special was syndicated across the US and aired on various dates (June 7th in New York City):

Posted by DinsdaleP at 2:48 PM