Ringo took most of 1975 off, appearing at the occasional movie premiere and sitting in on sessions with friends (e.g., Harry Nilsson's Sandman LP), but recording no new solo material. Instead, a greatest hits LP, Blast From Your Past, was compiled and released by Apple November 20th in the US (where it peaked at #30 in Billboard). It contained the first eight of Ringo's US single A-sides, plus the B-side "Early 1970" and the LP track "I'm The Greatest".

The album came out December 12th in the UK, where two of the cuts, "Oh My My" and "No No Song" had never been A-sides. The two were paired as a UK-only single on January 9th, 1976, but neither the LP or 45 charted. These turned out to be the final releases on the Apple label in Britain.

Ringo's vanity label, Ring O'Records, was still struggling along; on November 14th, it issued the UK-only single "I've Had It" by singer-songwriter Carl Groszman. The connection would come in handy when Ringo recorded Carl's "A Dose Of Rock 'N' Roll" on his next LP.

On November 21st, Ring O'Records released the UK single "Cokey Cokey"/'Away In A Manger" by one "Colonel Doug Bogie". Bogie was an engineer and one-man band who had briefly played bass with Queen. In the US, the sides were flipped when ABC Records picked up the single on December 8th. Reports that Ringo drums and Eric Clapton plays guitar on "Away In A Manger" remain unverified; either way, the single flopped in both countries.

While Neil Aspinall attended to the dismantling of Apple in London, Mal Evans had spent most of the last two years in the US, hanging out with John, Ringo, Harry, Keith Moon, and other partygoing musicians. He also immersed himself in Beatle fandom, making an appearance at the 2nd Beatlefest convention in New York on September 6th and 7th.

Mal had kept a diary throughout the 60's and spent much of 1975 turning it into a memoir, 200 Miles To Go (aka Living The Beatles Legend), with the help of a ghostwriter, John Hoernle. Mal made a couple of radio appearances to pre-promote the book (the manuscript was due to be submitted to the publisher January 12th).

The first, on November 29th, found him spending an hour chatting with Laura Gross on KCSN in Northridge, California, about his life and career in the Beatles' inner circle. It went so well that Mal was invited back to appear on KCSN's show Full Circle in December, where he talked to Ken Doyle and answered questions from callers.

Although Mal appeared cheerful and upbeat during both broadcasts, his life was not going well. Badfinger, the band he'd discovered and brought to Apple, had disbanded following the untimely suicide of Pete Ham in April. Mal was working in the studio with Badfinger's guitarist, Joey Molland, and his new band, Natural Gas. With John now firmly back in the Dakota and Ringo becoming a jet-setter (purchasing a residence in Monte Carlo that December), Mal saw less and less of the ex-Beatles.

Most importantly, his wife of 14 years, Lil, requested a divorce just before Christmas. On the evening of January 6th, 1976, Hoernle visited the L.A. apartment Mal shared with his girlfriend Fran Hughes. Depressed and heavily medicated, Mal picked up an air rifle which Hoernle was unable to wrestle away. Hughes called the police, who arrived and commanded Mal to drop his weapon. Disoriented, he failed to comply and was struck down by four shots from two of the officers, killing him on the spot.

Only Harry Nilsson was in town to attend Mal's cremation the next day, but his ashes were flown to England for the sake of his family. Harry recalled, "A couple of days later, Neil Aspinall from Apple called and kept saying, 'Harry, Harry! Where's Mal?' And I said, 'Well, I sent him'. And he said they couldn't find him, he's not here, and his mother's downstairs and his wife Lil is here and they're all crying, what am I supposed to tell them? So we sent out tracers at both ends, and eventually I got a call from the airport that they'd found him. I asked where, and they said, 'In the dead letter office!'"

Full Circle rebroadcast the November 29th interview with Mal during a January 25th tribute, followed by this epilogue. 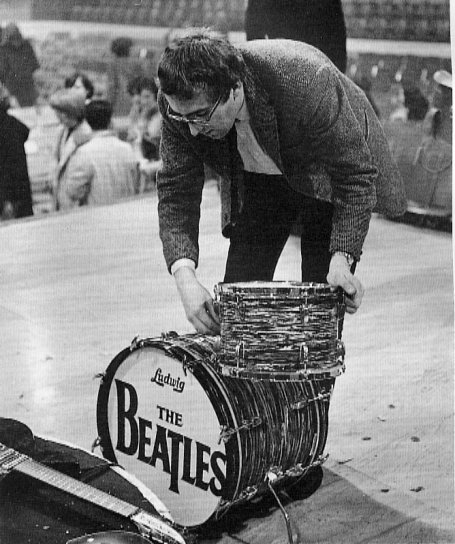 Posted by DinsdaleP at 5:26 PM