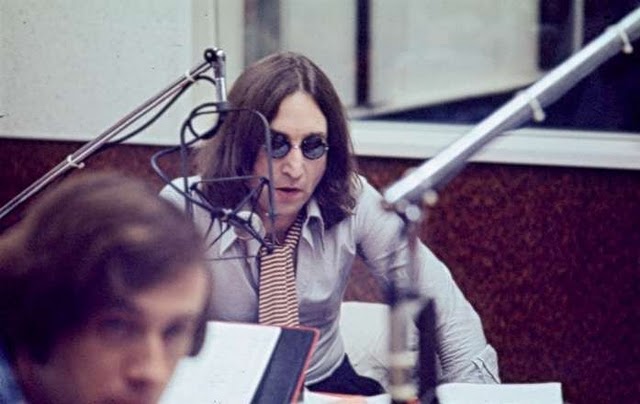 John Lennon's final TV (and public) performance occurred on the evening of April 18th, 1975. At the New York Hilton, the National Academy of Television Arts and Sciences held a banquet to honor Sir Lew Grade. The head of Associated Television, Grade had also purchased the Northern Songs catalog in 1969, which makes John's agreement to perform at the dinner surprising.

He did get revenge on Grade by having his backing band (BOMF again) don two-faced masks while he sang new vocals over prepared backing tracks. "Slippin' And Slidin'" and "Imagine" both made the final cut of Salute To Sir Lew - The Master Showman, while "Stand By Me" circulates from an audience tape. The show was aired in the US June 13th on ABC and in the UK June 20th on ITV:

With that, John began his retirement from public life, spending the rest of the spring and summer at home in the Dakota with his expectant wife, granting the occasional interview to publications such as Disc. The sole exception was a trip to Philadelphia in May, where he spent the weekend of the 16th through the 18th contributing to a radio fundraiser on WFIL-AM.

The Helping Hand Marathon kicked off around 3PM on the afternoon of the 16th, and while the DJs awaited John's arrival, he was busy taping an appearance in the same building. Larry Kane, who had covered the 1964 and 65 North American Beatle tours, now worked at WFIL's sister TV station, WPVI, as a news anchor. He invited John to fill in for the weatherman, and John's less-than serious forecast was aired on that evening's 6PM newscast:

By that time, John was already downstairs on the air in WFIL's radio studio, reading the names of people who pledged money, and playing requests such as "Be-Bop-A-Lula", "No No Song", and "A Hard Day's Night". DJ "Banana Joe" Montione also surprised John by having Yoko call in from New York to wish him luck.

On the 17th, John spent all afternoon on the air, shuttling between the studio and the parking lot where he posed for photos with fans, signed autographs, and collected donations in person, gathering the money in a pair of socks he had worn the previous day, then auctioning those off for $50!

By the 18th, John and the other disc jockeys were a bit punch-drunk from the long weekend, but did manage to exceed the goal of $110,000 before midnight. In the last 90 minutes of the marathon, John plays more Beatle songs ("Love Me Do", "The Word", and "Lucy In The Sky With Diamonds"), makes some requests of his own ("Angel Baby", "Hound Dog", and "Whole Lotta Shakin' Goin' On"), and announces that he's off to meet his wife Ringo in Detroit, Iowa!