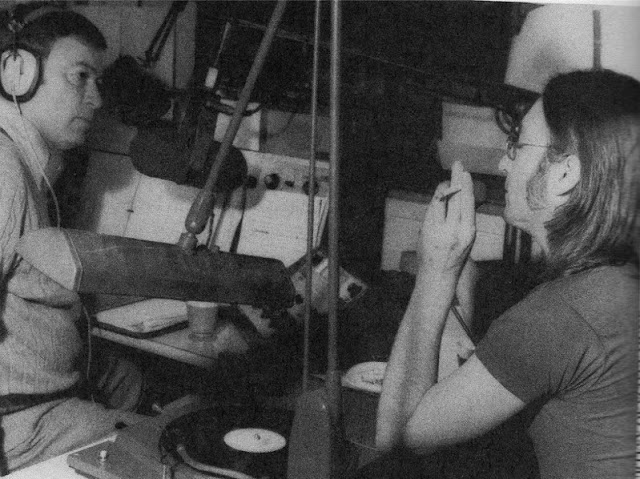 As part of a legal arrangement with music publisher Morris Levy, John had recorded songs from the Big Seven music catalog (including "You Can't Catch Me", which precipitated the issue) on his oldies LP. When John presented him with roughly-mixed tapes of the album, Levy enthused and proposed a TV campaign to sell the album via mail order (an increasingly popular, if somewhat tacky, way to hawk music in the mid 70's).

John tentatively agreed, but when he proposed the idea to Capitol's legal team, they nixed it immediately. Undaunted, Levy took the handshake agreement and ran with it, pressing up albums from the rough mixes, and slapping on an ugly cover with an inappropriate 1968 Lennon photo, calling the whole mess John Lennon Sings The Great Rock And Roll Hits: Roots, and releasing it on his own Adam VIII label.

Levy's TV spots began to air the weekend of February 8th-9th, by which time John had rushed to complete his own EMI-approved LP, Rock 'N' Roll. It omitted two songs ("Angel Baby" and "Be My Baby") and altered others via early fades and editing. While the lawyers went to work sending cease and desist orders to TV stations and record distributors, John set about promoting the new album, making sure to emphasize that Levy's package was inferior and unlicensed.

Towards the end of his 1974 appearance on WNEW-FM with Dennis Elsas, John had lamented that he missed reconnecting with DJ Scott Muni. He made up for that by giving Muni the first crack at airing Rock 'N' Roll. John brought the album, fresh off the presses, with him on February 13th, and spent three hours on the air with Scott, playing and chatting about each song from the LP.

The real bombshell, dropped in toward the end of the show, was John's announcement that he was now officially back together with Yoko, and that "their separation was a failure". He had abruptly moved back in to the Dakota a few days earlier, leaving a shell-shocked May Pang behind and scotching any plans to record with Paul in New Orleans.

Sometime in February, John also made a return visit to the airwaves of 3XY in Melbourne, once again talking with John O'Donnell about the new album.

Rock 'N' Roll was rushed to US shops by February 17th, accompanied by a radio commercial in which John advised listeners, "You should'a been there". The LP came out four days later in the UK, and would hit the top 10 in both countries; Levy's Roots would sell fewer than 2,000 copies before vanishing from the market.

Posted by DinsdaleP at 2:50 PM