Fancy Bumping Into You, Basingstoke 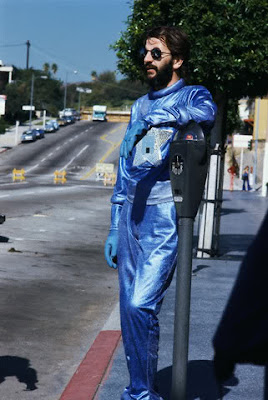 Goodnight Vienna, the eagerly-anticipated follow up to the smash Ringo, was released November 15th in the UK and three days later in the US. The first single was a cover of "Only You (And You Alone)", an oldie made famous by the Platters. Ringo's version featured John Lennon on acoustic guitar and Harry Nilsson providing smooth backing vocals.

As John had a month earlier, Ringo sat down with EMI's Bob Mercer in Los Angeles around the beginning of November for a chat to promote the single and LP. Their brief conversation was issued on a white-label promo single for EMI's British sales staff, with "Only You" on the flip.

The single came out November 11th in the US, where it peaked at #6; the UK release (simultaneous to the LP) scraped into the top 30 for a couple of weeks, then disappeared. Ringo went all-out to promote the song, filming a humorous and elaborate promo on November 14th at the Capitol Tower building in Hollywood. Harry joined Ringo for the shoot, which carried out the LP cover's Day The Earth Stood Still theme to ridiculous proportions:

Footage from the day's shoot was also used in the TV advertising campaign, with a voice-over assist from John:

Posted by DinsdaleP at 1:44 PM