Magic In The Air 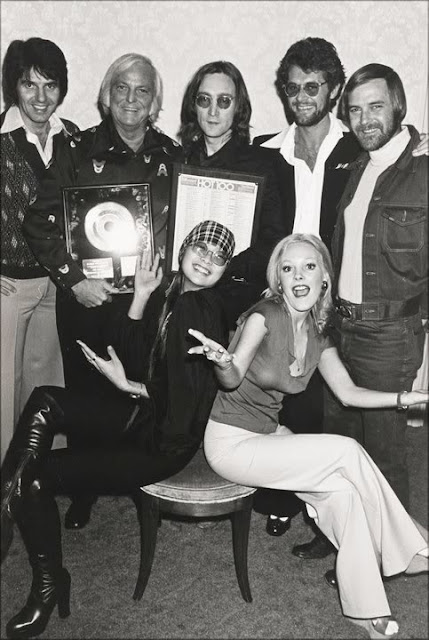 The week of November 16th, 1974 marked a commercial high point in John Lennon's solo career, as the single "Whatever Gets You Thru The Night" and album Walls And Bridges both topped Billboard's charts. All his promotional efforts of the past two months had paid off handsomely, and the album was certified gold in the US on October 22nd.

On December 7th, John and May flew to Los Angeles for a few days, stopping by Billboard's office on the 9th where John accepted an award from the magazine's chart director, Bill Wardlow. That evening, at Los Angeles Memorial Coliseum, John fulfilled a promise made to Howard Cosell back in October by appearing live during halftime of the Redskins-Rams game on ABC's Monday Night Football. The interview was brief and charming, if unenlightening, but would have a sickening echo nearly six years later:

John had been following the progress of George's hapless North American tour closely, well aware that he would be expected to join his ex-bandmate onstage when it reached New York. A meeting between the two at the Plaza Hotel on the 14th ended in anger when a frazzled George lashed out at Lennon for years of perceived slights. John refused to rise to the bait, and the two made amends the next day, with John and May attending George's performance at the Nassau Coliseum that night, but remaining offstage.

The tour was scheduled to conclude with three shows at Madison Square Garden on December 19th and 20th, and John offered to participate on the final night. He hinted at the reunion during a live interview on NBC's Today December 17th. Reporter Jim Hartz led off with the usual reunion questions before shifting to the immigration case (with John offering yet another lively and entertaining account of his 1968 drug bust):

John also took a moment to plug his new single, "#9 Dream", released the previous day in the US, where the song would peak (of course) at #9 on Billboard (I guess Bill Wardlow had a sense of humor). This turned out to be John's final live TV interview.

Posted by DinsdaleP at 8:05 PM