Waking Up On The Floor 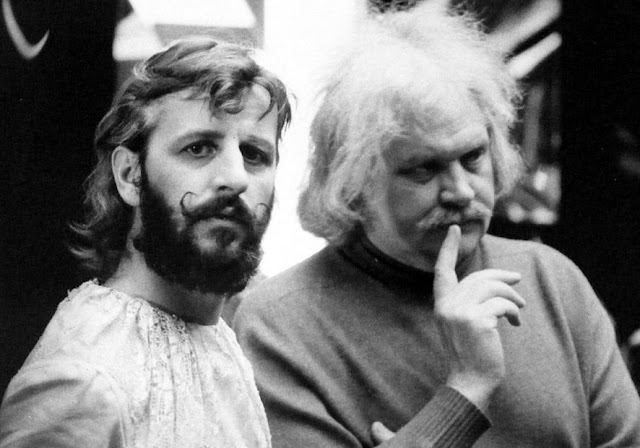 George and Pattie had separated in 1974, and Ringo and Maureen followed suit in 1975. Ringo began dating model and photographer Nancy Andrews, and the new couple flew from London to Los Angeles on February 7th.

His solo music career was still in great shape, with the second US single from Goodnight Vienna ("No No Song") released January 27th, and climbing to #3 on the Billboard chart. For the UK, the Elton John/Bernie Taupin composition "Snookeroo" was chosen as the next single release on February 21st; surprisingly, it failed to reach the top 30.

Ringo spent much of February and March filming Lisztomania, directed by Ken Russell, fresh from putting the Who's Tommy on film. Roger Daltrey played Franz Liszt and Ringo co-starred as the Pope:

Ringo was also fast friends with Who drummer Keith Moon, and had contributed to Keith's first and only solo LP, Two Sides Of The Moon. It was released March 17th in the US, accompanied by a radio spot with Ringo audible in the background. Ringo also drummed on Keith's cover of "Together" by their mutual drinking buddy, Harry Nilsson:


Speaking of Harry, he too had a new LP out in March 1975. Duit On Mon Dei had a drumming contribution from Ringo on the song "Kojak Columbo", and he also appeared in the TV spot promoting the album:

Posted by DinsdaleP at 1:17 PM