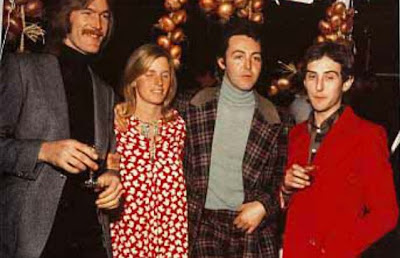 As soon as Ram was released, Paul was already considering his next step, and with the thought of going back on the road, he decided to form a permanent band. Beginning with Linda (for moral support more than her rudimentary keyboard skills), Paul retained drummer Denny Seiwell from the Ram session band, and called upon ex-Moody Blues guitarist Denny Laine.
The new group assembled at Abbey Road in August, 1971 to record their debut album, with Paul deliberately keeping the atmosphere loose and undisciplined. The result was perhaps his slightest solo album, Wild Life, containing a Ram leftover ("Dear Friend"), two lengthy jams ("Mumbo" and "Love Is Strange"), a throwaway nonsense ditty ("Bip Bop"), two short instrumental links, and four actual new compositions.
Around the time his and Linda's second child Stella was born (September 13th), Paul devised a name for the band: Wings. He introduced Wings at a launch party on November 8th at the Empire Ballroom in London. Two days later, a Wild Life listening session was held at Abbey Road for members of the press.
One of the reporters, Melody Maker's Chris Charlesworth, taped an interview that day, and rather than introducing his new band and their LP, Paul chose to unload a year's worth of stored resentment at the way Allen Klein and his ex-bandmates had been portraying him since the dissolution lawsuit had begun.
Paul had undoubtedly been hurt by John's song "How Do You Sleep" (on Imagine), and responded to its charges that he hadn't done anything worthwhile since "Yesterday". John had actually written that song partly in response to Paul's veiled attack on him and Yoko in "Too Many People" (on Ram), as he explains in this excerpt from the October 25th David Wigg interview (inadvertantly omitted from the earlier blog post).
In any case, the sniping continued, for after the Melody Maker article was published November 20th, John fired off a point-by-point rebuttal/attack, which was printed in the December 4th issue.
All Paul really wanted at this point was to be rid of Klein's management and set off on his own career, something which he stressed in another November interview with Record Mirror's Mike Hennessy.
Posted by DinsdaleP at 1:32 PM