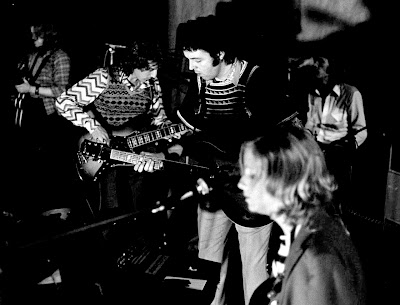 In mid-January, 1972, Wings found its fifth and final (for now) member, guitarist Henry McCullough, who had most recently been a member of Joe Cocker's Grease Band.
Wings spent the next couple of weeks rehearsing at the Scotch of St. James nightclub in London. Disc jockey Kid Jensen stopped by one day to interview Paul about the new band, the Wild Life album, and touring plans. The interview was broadcast January 28th on Radio Luxembourg.
For the first week of February, Wings rehearsals moved across town to the Institute for Contemporary Arts. Cameras rolled as the band ran through songs from Wild Life, oldies such as "Lucille", and new numbers including "The Mess":
At one or the other of these rehearsal venues, BBC reporter Johnny Moran interviewed Paul (most likely for Scene And Heard) about the impromptu nature of the imminent tour.
Meanwhile, Ringo was busy appearing on glamorous chat shows such as this one (taped January 28th and broadcast October 26th):
Posted by DinsdaleP at 2:12 PM