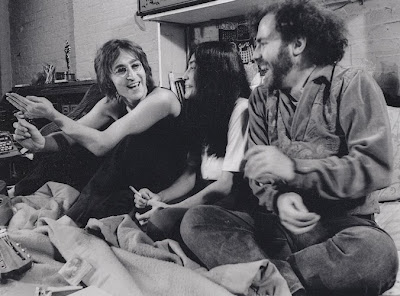 John and Yoko's radical activism phase went public in a big way in December, 1971. Sometime during the first week of the month, their Bank Street apartment was visited by a film crew from France's ORTF, shooting an interview for the TV series Pop 2.
Jean François Vallée interviewed the couple in their bed, alongside Jerry Rubin, and John was clearly caught up in the "Rock Liberation Front" movement, railing against capitalism, "British Imperialist pigs" in Northern Ireland, and espousing the immediate release of prisoners across the USA. Luckily, he also had his dobro in hand and treated viewers to some off-the-cuff renditions of new songs "Free The People" (later fleshed out as "Bring On The Lucie") and "Attica State", as well as Bob Dylan's latest single, "George Jackson".
The interview was aired in two parts, on January 8th and January 22nd on ORTF (they can be viewed here and here). While the French broadcast is generally marred by translation, some of the interview was used without voice-over in a British TV show, Aquarius, transmitted on LWT March 11th, 1972.
One cause John mentions in the interview is an upcoming rally to benefit poet/activist John Sinclair, then serving a ridiculous 10-year sentence in Michigan prison for selling two marijuana joints to an undercover officer. John and Yoko, along with Jerry Rubin and David Peel, flew to Ann Arbor on December 9th to participate in the concert. Sometime during their stay (perhaps that night), John was recorded in a hotel room with folk singer Phil Ochs, also on the bill. At Rubin's request, Ochs ran through his song "Chords Of Fame", accompanied by John on the ever-present dobro.
The concert took place the night of December 10th at Crisler Arena. John and Yoko topped the bill, finishing off the concert (accompanied by Peel and his band) with four then-unreleased politically-based songs, including "John Sinclair", penned specially for the occasion:
While the concert may not have been an artistic triumph, it did the trick, as three days later, Sinclair was freed from prison when the Michigan Supreme Court ruled the state's marijuana law unconstitutional. This victory only further convinced John Lennon of the righteousness of the path he was heading down, and shaped his actions for the next few months (which would cause him untold problems with the Nixon government).
Posted by DinsdaleP at 3:36 PM