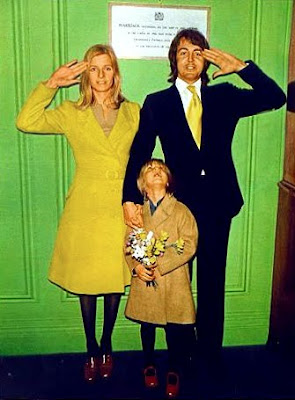 After three years as the Most Eligible Bachelor of the Beatles, Paul McCartney finally took himself off the market on March 12, 1969, when he married Linda Eastman at Marylebone Register Office in London. Present at the ceremony were Peter Brown, Linda's daughter Heather, Paul's brother and best man, Mike, and no other Beatles. As it turned out, George would have his hands full with a drug bust at his house later that day.
A Reuters film crew interviewed the newlyweds outside their front door, and later in the day ITV News spoke with the happy couple at the wedding reception, held at the Ritz Hotel. Here is a sampling of how news bulletins reported the story to heartbroken fans around the world.
On March 17th, Paul and Linda flew to New York for a honeymoon and to visit the Eastman family. CBS News caught up with them at Kennedy Airport.
Posted by DinsdaleP at 11:04 AM