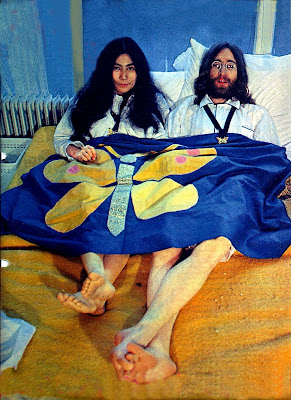 A mere four days after Paul tied the knot, John and Yoko flew to Paris, hoping for a romantic French wedding of their own. They settled for a ceremony in the British territory of Gibraltar on the afternoon of March 20th, 1969, flying back to Paris immediately afterward.
But the real honeymoon began on March 24th, when the newlyweds landed in Amsterdam to begin a week-long "Bed-In" to promote world peace. The event began the next morning with a lengthy press conference from bed in an attempt to explain the concept of the occasion to confused and bemused reporters. On the 25th, they also filmed interviews for ITV News and Dutch television.
They continued to accept visitors to room 902 all week, chatting live on VPRO radio's Hee on the 29th, and being filmed throughout by Peter Goessens for a documentary, Mr. & Mrs. Lennon's Honeymoon. Here is an earlier blog post with further Amsterdam Bed-In interviews.
Posted by DinsdaleP at 2:07 PM