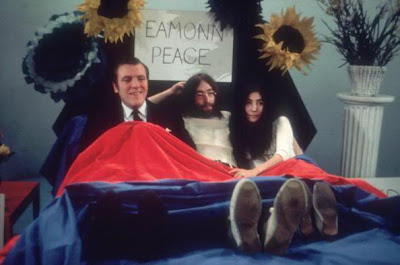 With their film Rape scheduled for a March 31st, 1969 premiere on Austrian TV, John and Yoko promoted both the broadcast and their peace campaign by flying to Vienna direct from the Amsterdam Bed-In. This time, the gimmick was to hold a press conference at the Hotel Sacher, answering questions from inside a bag (actually a hotel bedsheet tied in a bundle).
On April 1st, John and Yoko flew back to London Airport, where an ITV News reporter asked them about the goings-on in Amsterdam and Vienna. Later that night, they appeared on Thames TV's Today, chatting with host Eamonn Andrews on a bed brought into the studio.
John and Yoko accepted Andrews's invitation to appear on his self-titled talk show two nights later. Other guests on the live April 3rd Thames broadcast of The Eamonn Andrews Show included Jack Benny, Rolf Harris, and Yehudi Menuhin.
Posted by DinsdaleP at 2:44 PM