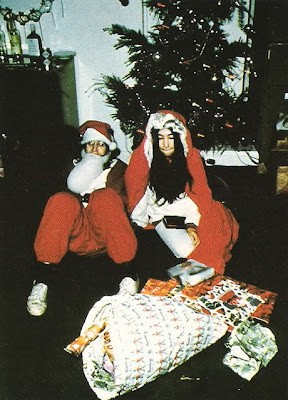 Even before the "White Album" sessions concluded with a marathon 24-hour mixing date on October 16th-17th, 1968, the Beatles had started to go their separate ways for the year.
Ringo split to Sardinia on the 14th, and two days later George flew to Los Angeles where he would produce Jackie Lomax's Apple LP, Is This What You Want? While in California, George appeared on underground radio and The Smothers Brothers Comedy Hour. He spent Thanksgiving in New York, hanging out with Bob Dylan and The Band.
Back in England, John and Yoko were busy dealing with a drugs raid on their apartment (and Yoko's hospitalization and subsequent miscarriage). This left Paul to promote the new album, now officially titled The Beatles, on Radio Luxembourg.
With all four Beatles in separate locations, they had to tape their contributions to the annual Fan Club Christmas flexidisc individually for the first time. The results would be skillfully joined together by Kenny Everett and mailed to club members on December 20th. Here are the unedited and unprocessed takes of John's contributions, two poems commonly known as "Jock And Yono" and "Once Upon A Pool Table".
Posted by DinsdaleP at 2:44 PM