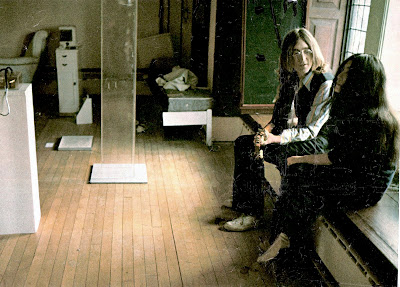 December 1968 was the first month of a year-plus-long media blitz by John Lennon and Yoko Ono, promoting their conceptual art, their avant-garde recordings, and ultimately advocating world peace.
On December 3rd, John was interviewed at home by students Maurice Hindle and Daniel Wiles. On the 11th and 12th, he and Yoko participated in the Rolling Stones' ill-fated Rock And Roll Circus TV special:
Just after midnight on the 12th, John and Yoko participated in a live broadcast, part interview, part disc spinning, part happening, for John Peel's BBC Radio show, Night Ride. While there, they promoted an upcoming appearance (in a white bag) at the "Alchemical Wedding" on the 18th at the Royal Albert Hall.
Sometime around this date, John had a dentist appointment in Knightsbridge; while he was being worked on, Yoko was interviewed in the waiting room by Abram de Swaan for the Dutch TV show Rood Wit Blauw. Once he was done in the dentist's chair, John took over from Yoko, chatting through an anesthetized mouth about their recent drug bust, revolution, and capitalism.
Meanwhile, John and Yoko's film Rape (Film No. 6) was due for airing on Austrian TV in early 1969. A film crew from Austria had been following the couple around, shooting some of the Rock And Roll Circus taping, and filming scenes at Kenwood of Yoko describing her art pieces while John strummed guitar in the background.
Posted by DinsdaleP at 3:45 PM