Sydney or Dave or Eric 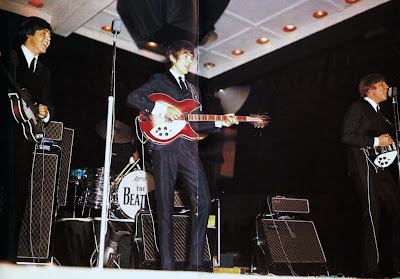 The Beatles' Melbourne visit wrapped up with two concerts on June 17th, 1964, the last of which was videotaped for broadcast on local Channel 9 the following month. TV news reports out of Sydney and Canberra were tracking the group's every move by this point.
On June 18th, they flew into Sydney for a three-night stand. As it happened to be Paul's 22nd birthday, 2SM DJs Bob Rogers and Mike Walsh wished him well that afternoon in the group's Sheraton Motel Hotel suite. That night, they opened at Sydney Stadium, an occasion captured in the Cinesound newsreel Beatles at the Stadium:
Posted by DinsdaleP at 1:04 PM