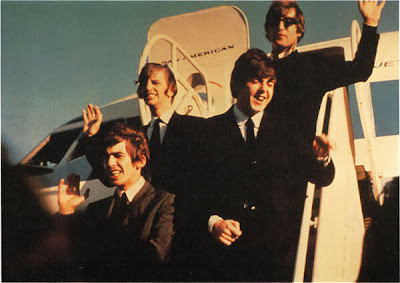 From Winnipeg, The Beatles and company flew south to Los Angeles, landing around 4pm on August 18th. They would play the Hollywood Bowl a week later, but this stop was merely to pass through customs, stretch their legs, and hold an impromptu press conference in the Pan Am lounge. KRLA's Beatle-boosting DJ Dave Hull also recorded quick chats with each of the lads before they replaned.
An hour later, they landed at their final destination of the day, San Francisco. Local TV channel KCRA sent a camera crew to cover the arrival, during which the band put in a brief and dangerous appearance in "Beatlesville", a small fenced-in area in the midst of thousands of manic fans.
The day's second press conference, just as disorganized as the first, took place at the San Francisco Hilton. Afterwards, John and Paul spoke with Miami reporter Larry Kane, who would be covering the entire tour for WFUN-AM. At the airport, Kane had also interviewed evangelist Edwin Teaman, who was protesting against The Beatles based on remarks Derek Taylor had made in a Saturday Evening Post profile.
Posted by DinsdaleP at 3:24 PM