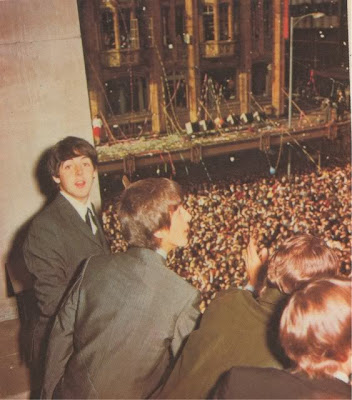 From June 15th - 17th, 1964, The Beatles (with Ringo reinstated on drums) performed two shows each night at Melbourne's Festival Hall. Early on the 15th, Brian Epstein saw Jimmy Nicol back to London at Essendon Airport; the two were filmed for one final interview wrapping up Jimmy's Beatle career.
Later that afternoon, John Lennon sat for a filmed interview at the Southern Cross Hotel, discussing A Hard Day's Night, his book, and Epstein's influence on the band's success. Brian was also interviewed that day for the Australian TV show People '64.
On the 15th or 16th, People '64 sat down with John for a chat, and on the 16th, they covered the group's balcony appearance at Melbourne Town Hall, following another reception with the lord mayor.
Posted by DinsdaleP at 2:29 PM