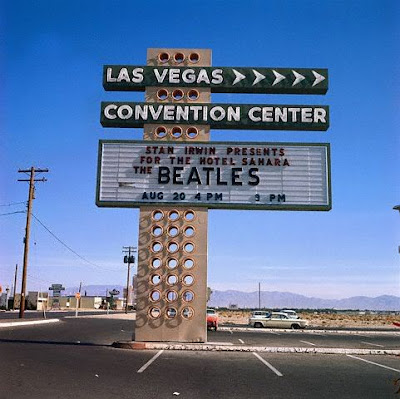 City #2 on the tour was Las Vegas, where The Beatles had to fight their way through fans as they checked in to the Sahara Hotel at 2:30 in the morning on August 20th, 1964.
After catching up on sleep, there was only time for some publicity photos with slot machines (brought up to their suite so they could avoid being mobbed in the casino) before driving to the Convention Center for shows at 4pm and 9pm. Backstage before the first house, Larry Kane interviewed Paul and Ringo about jelly babies, segregation, the Rolling Stones and James Bond.
August 21st saw The Beatles fly north to Seattle for a concert at the Coliseum; coverage of that day's events can be found in an earlier blog post.
Posted by DinsdaleP at 2:47 PM