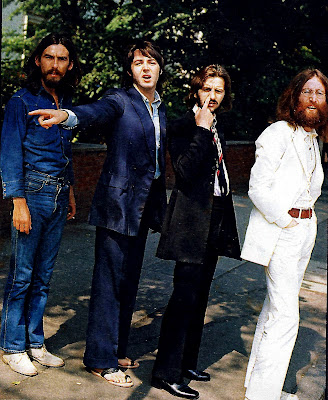 The long-awaited Abbey Road LP was released in the UK on September 26th, 1969. Most previous Beatles albums had promotion from the group as a whole, whether appearing on TV, radio, or giving print interviews. This time, each of the band members would give individual interviews about Abbey Road, describing the new songs for different media outlets. Listening to all four in succession is an enlightening way to compare their opinions on the final Beatles LP.
George spoke with Ritchie Yorke of the Toronto Globe and Mail, not long after John's return from Toronto on the 15th. On the 19th, Paul chatted to David Wigg for BBC Radio 1's Scene And Heard, broadcast in two parts on the 21st and 28th.
Ringo and John both recorded track-by-track dissections of Abbey Road for Radio Luxembourg; Ringo's talk with "Kid" Jensen was aired September 26th, and John's rundown with Tony Macarthur was played one night later.
Posted by DinsdaleP at 10:56 AM