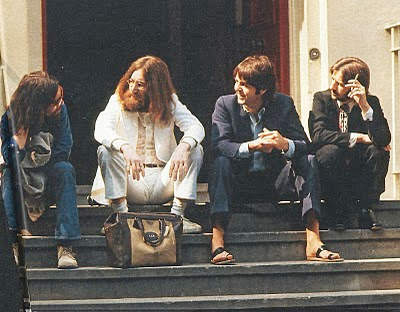 The last group Beatles project turned out to be the recording of Abbey Road in July and August, 1969. John's auto accident in Scotland on July 1st meant that he missed the first batch of sessions, but by the recording of "Come Together" on July 21st, all four Beatles were hard at work inside EMI Studios.
With the daily focus on recording, public appearances and interviews ground to a halt, even for the ubiquitous John and Yoko. Only BBC Radio's Kenny Everett gained access to the Fabs, recording interviews for his Radio 1 show Everett Is Here.
The first may have been recorded July 24th, while Paul worked on a demo of "Come And Get It", as it includes a piano-based jingle for Kenny, as well as an interview with George about the July 26th Rathayatra Festival in Hyde Park.
Kenny definitely dropped by EMI on August 14th, listening to a mixing session for "Sun King", Mean Mr. Mustard", and "Maxwell's Silver Hammer" - inside knowledge which he parlayed into several self-harmonized jingles for his show. He also chatted with John that day about the album's progress.
Posted by DinsdaleP at 2:24 PM