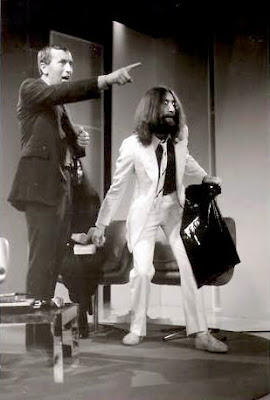 With the Bed-ins behind them, John and Yoko put in another appearance on a David Frost TV chat series, this time the aptly named David Frost Show, taped June 14th, 1969 for syndication across the US in July. They arrived bearing gifts, including a "box of smile" for David, acorns in a bag for the audience, and of course a copy of their new LP, Life With The Lions.
Sometime in June, John was also interviewed by David Gresham for South Africa's Springbok Radio, discussing his 1966 "bigger than Jesus" remark which led to a South African media ban on Beatles records. The remainder of June found each Beatle away from home, as George was in Sardinia, Paul in Corfu, Ringo in France, and John in Scotland.
Posted by DinsdaleP at 3:07 PM