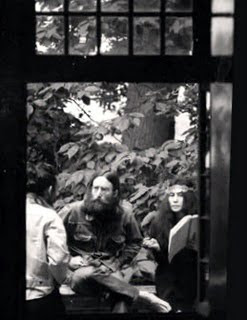 The Beatles' career wound down with a series of "lasts" as a four-piece band in August 1969. Last song begun on the 1st ("Because"); last LP cover photo taken on the 8th (Abbey Road); last overdub on the 19th ("Here Comes The Sun"); last group mixing session on the 20th; last group photo shoot on the 22nd.
Paul and Linda welcomed their first daughter, Mary, into the world on August 28th, and three nights later, John, George, and Ringo watched Bob Dylan perform at the Isle of Wight Festival.
George had been working closely with the London branch of the International Society for Krishna Consciousness, even recording a hit single for them, "Hare Krishna Mantra", which was released August 29th on Apple.
The founder of ISKCON, A. C. Bhaktivedanta Swami Prabhupada, was visiting London a couple of weeks later, and John and Yoko offered him a place to stay on the spacious grounds of their Ascot estate. The day he arrived (September 11th), the swami had a long conversation with John and George at Tittenhurst, which was recorded for posterity.
Posted by DinsdaleP at 11:13 AM