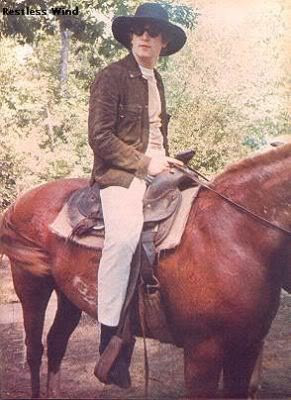 September 19th, 1964, was a day of rest for The Beatles. They spent the day as guests of American Flyers owner Reed Pigman, on his ranch in Alton, Missouri.
The next morning, they flew from Arkansas back to New York City for one final concert, a charity show at the Paramount Theater. During the flight, KYW-AM reporter Art Schreiber interviewed Paul, George, and Ringo.
On the morning of the 21st, it was time to assemble at Kennedy Airport for the long flight back home to London. ABC News cameras captured the scene as George and Ringo spoke with reporters while signing autographs and waving farewell to fans. Art Schreiber was also present, taping goodbye messages and interviewing Derek Taylor about his surprise resignation as Beatles press officer (following a squabble with Brian Epstein).
The road-weary Beatles arrived at London Airport that night, ready to enjoy a week of recuperation before heading back into EMI Studios to record Beatles For Sale. The month-long tour of North America was perhaps the most grueling they would ever undertake, and certainly the most financially rewarding to date. As Paul noted upon their return, American fans seemed to have a limitless appetite for Beatle music in the summer of '64.
Posted by DinsdaleP at 1:06 PM