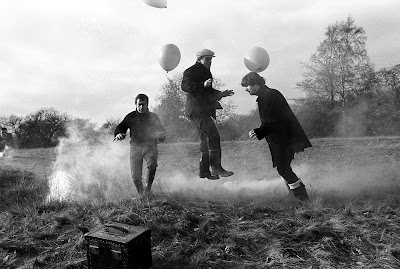 Dudley Moore and Peter Cook's sketch/variety TV series, Not Only... But Also... made its debut on BBC2 January 9th, 1965. John Lennon agreed to participate in the premiere episode, reading and adapting selections from his book In His Own Write.
His first contribution was a filmed piece to accompany Moore's reading of "Deaf Ted, Danoota (and me)". Lennon, Moore, and Norman Rossington shot the whimsical footage on Wimbledon Common in the morning of November 20th, 1964.
Nine days later, John was in the BBC Television Centre to tape a lengthy segment for the show. The same trio in various combinations recited "About The Awful", "All Abord Speeching", "Good Dog Nigel", "Unhappy Frank", and "The Wrestling Dog". John also appeared during the show's closing theme song, "Good-bye-ee".
Posted by DinsdaleP at 1:48 PM