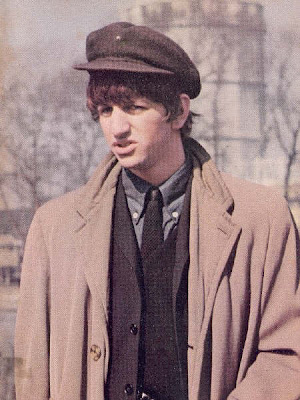 The Beatles' busy April of 1964 continued with daily filming for A Hard Day's Night at Twickenham and various London locations (such as Ringo's Thames-side stroll, shot April 9th). In their spare free hours, they were interviewed by American DJ Tom Clay (April 7th), and Paul appeared on David Frost's TV chat show, A Degree Of Frost (April 15th).
The movie got a name and a title song when John composed "A Hard Day's Night". The Beatles assembled April 16th at EMI Studio 2 to record the number, and during breaks in the action, they took turns on the phone speaking with Chicago disc jockeys Art Roberts and Ron Riley of WLS-AM. About 5 minutes of this interview was released on a promo LP in 1979, but a further 17 minutes exists from a poor-quality off-line recording. Here is a composite recording from both sources.
Posted by DinsdaleP at 1:23 PM