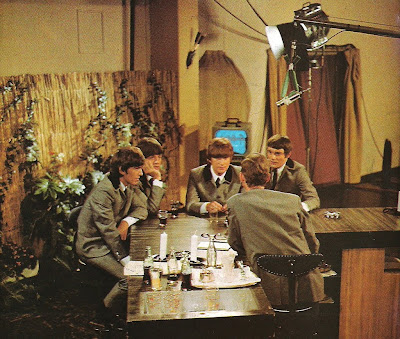 From Copenhagen, The Beatles flew to Amsterdam early in the afternoon of June 5th, 1964. Their arrival was covered by AVRO Radio's Joop van Zijl for Radiojournaal, and they were ushered into Schiphol Airport's VIP Room for a slightly chaotic press conference.
From there, they were driven to the Doelen Hotel, where they filmed a TV interview with a reporter who recognizes Jimmy Nicol but not Paul or George, and calls the fourth Beatle "John Leonard".
That evening, the quartet congregated at the Cafe-Restaurant Treslong in Hillegom, the location for taping a TV special, The Beatles in Nederland. After a lengthy interview with Berend Boudewijn (translating questions from the Dutch audience), The Beatles performed six songs for an increasingly-enthusiastic crowd, who managed to overrun the stage completely by the final song, leaving Jimmy Nicol to mime alone atop his drum riser. Also present at the taping was a correspondent for the radio show Balans, who filed this report.
Posted by DinsdaleP at 3:40 PM