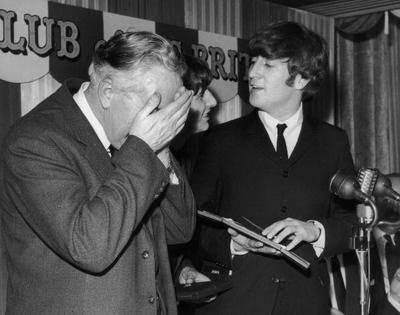 Let's see, where was I...?
Oh, yes. The Beatles were busy filming A Hard Day's Night in March, 1964. On the 18th and 19th, they recorded special inserts for BBC Radio's The Public Ear. On the latter of those days, George interviewed Paul as they drove to the Dorchester Hotel to pick up awards from the Variety Club of Great Britain.
Chosen as Best Showbusiness Personalities of 1963, the group stayed for lunch and were presented with their awards by soon-to-be Prime Minister Harold Wilson, making a few quips for the multiple newsreel cameras and hurrying back to the film set.
Posted by DinsdaleP at 8:36 PM