Aminals In The Zoo 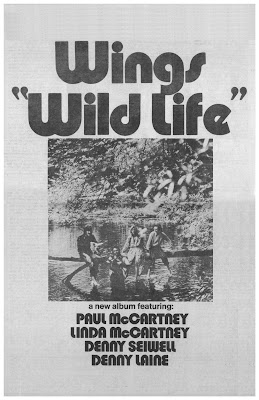 Paul and Linda began December 1971 with a brief vacation in Jamaica, and then flew to New York to meet up with the other members of Wings for rehearsals and promotion of Wild Life (issued December 7th in the US).
The group appeared live on WCBS radio December 15th for an interview with Ed Williams. Although he was reluctant to talk about the legal troubles and feuds surrounding his ex-bandmates, Paul did reveal that he had met with John "this very evening". In addition to tracks from Wild Life, Paul and Linda spun a number of reggae singles brought back from Jamaica, as well as Badfinger's new single "Day After Day".
They also premiered a new Wings instrumental, "The Great Cock And Seagull Race", which, based on its appearance on the new Ram reissue, may have been recorded early in the year and overdubbed/remixed in December. Although it remained unreleased at the time, it was being considered as a single B-side.
One potential A-side, "Mary Had A Little Lamb", was rehearsed that month by Wings at the New York headquarters of MPL. WRKO radio visited the sessions, capturing a bit of the rehearsal and taping interviews with the band for a special, Paul McCartney Now, broadcast January 13th, 1972.
In the end, no single was released to accompany the album (although "Love Is Strange" was nearly issued in the UK), and despite the promotion, bad reviews and word-of-mouth kept Wild Life out of the top ten in the UK (it peaked at #10 in the US).
Posted by DinsdaleP at 2:18 PM