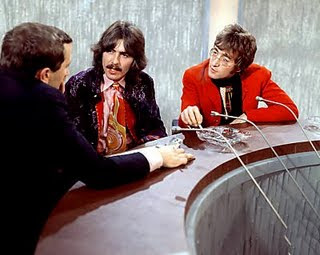 Audience response to John and George's 1967 appearance on The Frost Programme was so well-received that Frost invited them back on October 4th to further discuss Transcendental Meditation.
This time, other guests were on the panel, including TM proponents John Allison and Nick Clark. Taking up the opposing (or at least highly skeptical) viewpoint was writer John Mortimer. John and George weren't exactly persuasive in their counterarguments, with George coming off condescending and John merely cranky.
Posted by DinsdaleP at 11:18 PM