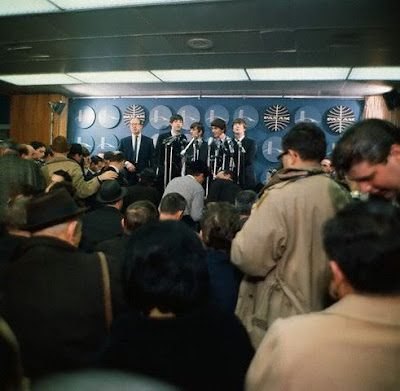 The Beatles' first press conference on US soil was by far the most covered and one of the more energetic, spontaneous, and chaotic of their career. Shortly after landing at JFK airport in New York on February 7th, 1964, they lined up in front of a Pan Am Airlines backdrop and faced a room packed with newspaper, radio, newsreel, TV, and magazine reporters. As press officer Brian Sommerville did his best to field questions, The Beatles fired back snappy and disarming rejoinders.
Here is a composite recording of the event, assembled from over a dozen audio and video sources.
Posted by DinsdaleP at 9:25 PM