What's The Use Of Worrying? 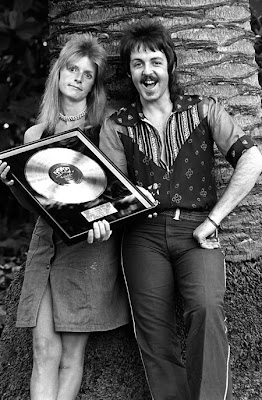 Before flying back to London from Los Angeles, Paul received a gold record for Band On The Run, which was proving to be the sturdiest seller in his solo career. It had entered the Billboard chart back in December 1973, and it took until April 13th (helped by the "Jet" single) to reach #1. The title track was issued as a single April 8th, and it too would top the chart by June, bringing the album back up to #1 twice more that summer.
All this success meant Paul had a chance to take a break from recording and touring while he recruited new Wings members and stockpiled fresh compositions. Jimmy McCulloch had already won the lead guitarist role, and after a series of auditions in April and May, Geoff Britton was elected to fill the vacated drummer's seat.
Although Wings issued only one single and no albums in 1974, Paul wasn't exactly hard to find on store shelves if you knew where to look. Back in 1971 during the Ram sessions in New York, he had sat in on bass with singer/guitarist Leslie Fradkin. Paul's contribution to the song "God Bless California" came out June 17th, 1974 on the LP Pass On This Side, credited to Thornton, Fradkin & Unger and the Big Band.
In early '74, during the McGear sessions, Paul also produced and played on a single for the Scaffold, a music/comedy/poetry group Mike McGear had co-founded. "Liverpool Lou" was released May 24th, and climbed to #7 in the UK:
During his and Linda's visit to the US, Paul also dropped by James Taylor's sessions for the LP Walking Man, which came out June 1st. Paul, Linda, and Carly Simon provided backing vocals on two numbers, "Rock 'N' Roll Is Music Now" and the anti-Nixon tune "Let It All Fall Down":
One of Paul's least-known compositions (co-written with Linda) was "4th Of July". It was written at least as early as the spring of 1973 (he strummed a bit of it while taping James Paul McCartney), but ended up being donated to singer John Christie. His version, produced by Dave Clark (of DC5 fame), came out as a single June 28th, perhaps too close to the holiday to make an impact on the charts:
Posted by DinsdaleP at 2:26 PM