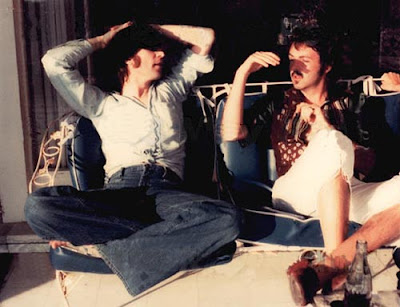 On March 8th, 1974, Paul and Linda were interviewed at MPL's offices in London for the US morning news show Today. Scott Osborne conducted the filmed interview, which covered the standard reunion topics and touched on Paul's songwriting technique (using "Picasso's Last Words" as an example). The film was aired in two segments on NBC March 12th and 13th.
A week later, Paul and Linda flew to Los Angeles, where they would attend the Academy Awards on April 2nd (and watch "Live And Let Die" lose to "The Way We Were" for best song, as well as seeing David Niven deal effortlessly with a streaker). Of course, John and Ringo were both in Southern California that spring, stoking the reunion fire once more.
Tired of waiting around for Phil Spector to resume the oldies sessions, John had agreed to produce Harry Nilsson's next album, Pussycats. The duo were already making headlines for their drunken antics, most notably being thrown out of the Troubadour on March 12th for heckling the Smothers Brothers.
There was a large pool of session musicians to choose from in Los Angeles (Spector had used dozens of them the previous fall), and whoever was around the Record Plant on Sunday nights would often join in a loose weekly jam dubbed the "Jim Keltner Fan Club". On one such night just prior to the Pussycats sessions, Mick Jagger was present and decided to cut a song with John producing and the "Fan Club" providing a tight backing. The result, "Too Many Cooks (Spoil The Soup)", remained unreleased until the Very Best Of Mick Jagger collection in 2007:
While that session produced admirable results, there was no better illustration of the adage about too many cooks than the events of March 28th. It was the first night of the Pussycats sessions, and after cutting the first song, a cover of Bob Dylan's "Subterranean Homesick Blues", a drunken (and likely cocaine-fuelled) John and Harry were joined in the studio by Paul and Linda, along with Stevie Wonder.
What could have been a memorable, if not mind-blowing, jam session was spoiled by nerves, intoxicants, and the bizarre decision to stick Paul behind a drum kit. Unable to settle on a song everyone could play, John vented his frustration by bitching about the level in his headphones; his and Harry's voices were pretty shot anyway, and the results of the sole 70's Lennon/McCartney reunion are not pleasant to hear:
By that time, John and May were living in a beach house in Santa Monica along with Harry, Klaus Voormann, and Ringo (with other musicians and partygoers such as Keith Moon, Mal Evans, and Jesse Ed Davis coming and going at will). Paul and Linda dropped by on April 1st (just missing Ringo's presence), when the above photo was taken. It was the last time John and Paul were photographed together.
Posted by DinsdaleP at 2:43 PM