Rabbits On The Run 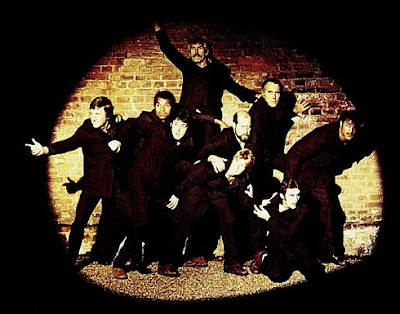 Having chosen "Band On The Run" to be the title track of his next LP, Paul wanted to represent the song's narrative on the album cover. With Wings down to a trio, he boosted the "band" of convicts making a prison break by inviting a number of celebrity acquaintances to join the photo shoot.
On October 28th at Osterley Park, Paul, Linda, and Denny were joined by James Coburn, John Conteh, Clement Freud, Christopher Lee, Kenny Lynch, and Michael Parkinson. Cameras were rolling in the dressing room (watch out for Paul and Kenny harmonizing on "Misery") and outside as Clive Arrowsmith snapped the iconic photo:
On October 29th, John's "Mind Games" single and LP were released in the US, the same day Ringo's self-titled album hit store shelves. A friendly competition now existed among the ex-Fabs, and Ringo won this one hands down, with "Photograph" topping the chart, and Ringo at #2 on Billboard (right behind Elton John's monumental Goodbye Yellow Brick Road).
Mind Games only made it to #9, with the single "Mind Games" topping out at #18; John's response to the situation was a tongue-in-cheek telegram sent to Ringo: "Congratulations! How dare you? And please write me a hit song."
John had other problems to deal with, such as the increasingly erratic Phil Spector, who was quickly losing a grip on the "oldies" sessions, which were now more of an excuse to drink, snort coke, and wreak havoc than record decent music. He took a break from recording in November to promote Mind Games, including a phone interview with Nicky Horne and Sarah Ward on November 12th for Capital Rap, on the newly-launched Capital London radio station.
As her album Feeling The Space was released in the US on November 2nd, Yoko was also on the promotional trail. She played a week of nightclub gigs in New York at the end of October, and spent the first week of November in Los Angeles, meeting up with John and May for lunch. Yoko also made a return visit to The Mike Douglas Show, performing "Angry Young Woman" for the November 15th broadcast.
Posted by DinsdaleP at 12:39 PM