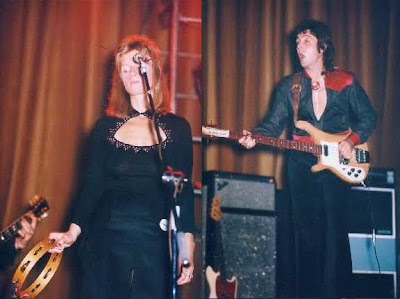 In April 1973, after taping the James Paul McCartney TV special, Paul went back into the studio with Wings, this time to back up his brother Mike McGear on "Leave It", a catchy number written by Paul:
A more notable April session took place at Apple Studios, where Ringo was working on his Ringo LP with Richard Perry. With John and George already on the album, Paul's contributions made the Beatles-on-vinyl reunion complete. In addition to adding a "mouth sax solo" to "You're Sixteen", Paul played piano and synthesizer on his own composition, "Six O'Clock". The song's rave-up coda heard on promo copies of the LP, with Paul and Linda singing, might as well be a Red Rose Speedway outtake:
Sometime around April or May, Paul was interviewed by DJ Nicky Horne; topics included the session with Ringo, the end of the Klein era, and what would be Wings' next single, the James Bond theme song, "Live And Let Die".
Wings went back on the road in May, playing 17 shows in 12 cities across England, Wales, and Scotland. The setlist was greatly streamlined from the 1972 tours, and updated to include two songs from Red Rose Speedway, plus the debut for "Live And Let Die".
On May 12th, following a concert at the New Theatre in Oxford, disc jockey David Symonds spoke with Paul for his Radio Luxembourg show. After chatting about the concert and songwriting (including a new composition, "Picasso's Last Words"), Symonds nearly brings the conversation to a halt by asking about Paul's relationship with the other ex-Beatles. Things end on a lighthearted note with David and Paul swapping cute stories about their daughters.
Posted by DinsdaleP at 10:06 AM