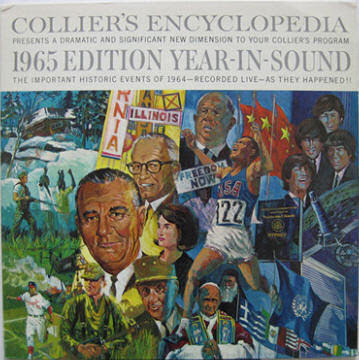 During their first visit to New York City, The Beatles enthusiastically recorded radio station IDs and promos for nearly every disc jockey in the city, before Brian Epstein put a stop to the practice.
Here is a collection of radio spots for WMCA-AM, featuring jingles and hype for various "Good Guy" deejays. Ed Rudy even talked them into promoting him as "The Fifth Beatle" in a series of clips included on his Radio Pulsebeat LPs.
Rudy also spoke with Mal Evans and Ed Sullivan over the course of the week, and CBS News filmed interviews with fans around the city. Winding up this collection of miscellaneous recordings is an excerpt of the "Year In Sound" LP released by Collier's Encyclopedia early in 1965, with a couple of Beatle interview clips of unknown vintage (but most likely from February 1964).
Posted by DinsdaleP at 2:45 PM