Hate To Miss The Train 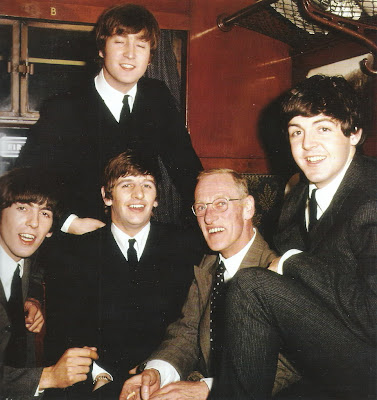 Location filming for A Hard Day's Night began March 2nd, 1964 at Paddington Station in London. The first scenes shot took place on a train, and The Beatles and co-star Wilfrid Brambell spent the whole first week performing for the cameras while riding the rails through the British countryside.
During that week, Paul and George were interviewed by Australian DJ Roger Henning of Melbourne station 3DB, promoting their upcoming tour in June.
One of the scenes filmed on the train had the boys in a culture clash with Richard Vernon's upperclass passenger. A snatch of rock music heard in the scene (over a transistor radio) was said by producer Walter Shenson to be a Beatle performance, taped specially for the movie. However, a tape of the full song was recently auctioned, and the samples made available aren't exactly their playing style (the drumming in particular).
Posted by DinsdaleP at 3:58 PM