Of Mice And Lambs 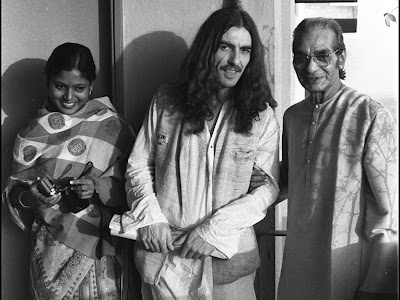 After spending the latter half of 1971 on the Bangla Desh concert/album/film, George took it easy for the first half of 1972. He and Pattie were injured in a crash on February 28th when George totalled his Mercedes on the M4. In the spring, they traveled to India, visiting Ravi Shankar's brother Uday in Calcutta. And on June 5th, George and Ravi were in New York to collect UNICEF's "Child Is The Father Of The Man" award for their relief efforts.
During March and April 1972, Ringo had been sitting in on sessions for Harry Nilsson's new album, Son Of Schmilsson, at Trident Studios. The proceedings were filmed for a still-unreleased documentary, Did Somebody Drop His Mouse?, in which Ringo appears briefly:
Meanwhile, Paul was back in the studio with Wings, who would record sporadically from March through December 1972 at EMI, Trident, Morgan, Olympic, and Island Studios, building up material for singles and (eventually) their next LP. Their next release was the single "Mary Had A Little Lamb", taped in March at Olympic, backed with "Little Woman Love", a leftover from the November 1970 Ram sessions.
The single was released May 12th, 1972 in the UK, and Wings appeared on Top Of The Pops May 25th to mime the A-side. On June 6th, the band videotaped several promo clips of "Mary Had A Little Lamb" for use on various TV shows. One was aired on The Basil Brush Show June 24th, a second on Top Of The Pops June 29th, and a third on US TV's Flip Wilson Show, broadcast October 12th on NBC:
And don't think I've forgotten John and Yoko! David Peel's LP The Pope Smokes Dope was finally released by Apple (in the US only) on April 17th, and on May 24th and 25th John and Yoko were interviewed by Peel's friend Ron Skoler for ROCK magazine, discussing Peel and their general views on art.
John and Yoko's own album, Sometime In New York City, came out in the US on June 12th to lukewarm reviews and horrible sales by ex-Beatle standards (failing to reach Billboard's top 40). Its release was delayed until September in the UK, where it inexplicably sold much better, peaking at #13. Here is a vintage radio ad promoting the album.
Posted by DinsdaleP at 12:45 PM