Save Us From The Queen 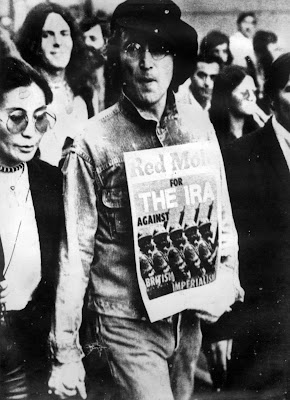 In August, 1971, John Lennon spent his final days in England completing filming of Imagine and lending his name to a couple of causes.
Most conspicuous was his support of Oz magazine, whose editors were being prosecuted under the Obscene Publications Act. John had composed a song, "God Save Oz", recording a demo in April and then producing an Apple single in May, performed by the "Elastic Oz Band" and released as "God Save Us" in July. John and Yoko recorded a quick promo to plug the song for radio play.
On August 5th, a verdict of guilty was handed down for all three defendants, along with a prison sentence (later overturned on appeal). John and Yoko wasted no time in taping a message of support the following day, for airing on pirate station Radio Free London.
On August 11th, John and Yoko joined a protest march in London, not only against the sentences but the British government's recent arrest and internment of 342 people suspected of having ties to the IRA. Both spoke to reporters about their reasons for marching, with John's reply unwittingly sowing the seeds of a future song.
August 12th, 1971 may have been John's final day in his native country. According to his tape archive, he spent part of it with Yoko reading selections from her book Grapefruit, although the recording more likely stems from July, when they were heavily promoting the republication.
Posted by DinsdaleP at 5:43 PM