You Wrecked Me Gag, You Fool! 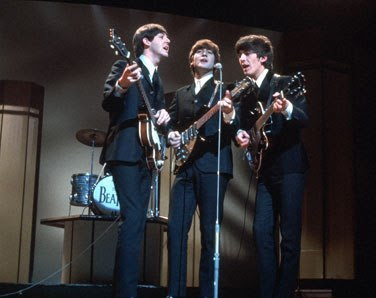 After their Juke Box Jury appearance, The Beatles finished 1963 performing in cities such as Doncaster, recording two BBC Radio specials, and performing a nightly Christmas show at the Astoria Cinema in London.
They rang in 1964 by conducting an open-ended interview for Capitol Records, who had released their single "I Want To Hold Your Hand" in the United States the day after Christmas. Sometime early in the year, they also sat for a lengthy interview for an overseas radio series, Bulletin From Britain.
On January 5th, George and Ringo recorded a special insert for the BBC Radio series The Public Ear, in the show's "Air Mail" segment. It took two takes to get right, as the first had George blowing Ringo's prepared joke. The "wrecked" take was actually used in the January 12th broadcast, while the "correct" take finally saw the light of day in in the 1972 radio special The Beatles Story.
Posted by DinsdaleP at 3:15 PM