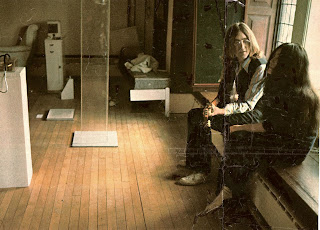 "In 1968, I was 23 and approaching the end of my first term at Keele University. On the afternoon of 2 December, I emerged with Daniel Wiles, a fellow student, from Weybridge railway station into the wintry stillness of Surrey's stockbroker belt, having hitch-hiked all the way from Staffordshire. We were there to interview John Lennon and Yoko Ono.

I had read about their first performance-art event together back in June, when they planted acorns for peace at Coventry Cathedral, and continued to be intrigued by the couple's exploits. Since then, John and Yoko had been getting flak in the British press. That October, they had been caught in a drugs bust at a flat in London belonging to Ringo Starr. In the aftermath, Tariq Ali's radical newspaper Black Dwarf published an angry "open letter", which accused Lennon of selling out to the establishment and claimed that the Beatles' music had "lost its bite". I felt it was time to counter the growing feeling against John and Yoko, so I wrote to Lennon, via the magazine Beatles Monthly, outlining my ideas for an interview. To my surprise, he replied.

Outside Weybridge station, a Mini Cooper with smoked-glass windows skidded to a halt, like something out of The Italian Job. In the driver's seat was Lennon, looking much as he does in the colour photograph included with the Beatles' 1968 White Album: faded blue Levi's jacket, white T-shirt and jeans, dirty white sneakers, his shoulder-length hair parted in the middle, and wearing the now famous "granny glasses". We students crammed into the back of the Mini and John drove us up the bumpy private road that led to his house, Kenwood.

In the sitting room at the back of the house, we sat down on thick-pile Indian carpets around a low table, cross-legged. Yoko said little, as we all knew this was primarily John's day - and he said a lot. Apart from a short break, when Yoko fed us macrobiotic bread and jams she had made, Lennon talked continuously for six hours."

Here are 16 minutes of excerpts from the Hindle/Wiles/Lennon interview. Note that the traditional dating of this recording is December 3rd, 1968, not the 2nd as Hindle writes above.

Posted by DinsdaleP at 3:44 PM