Bold As A Sergeant Major 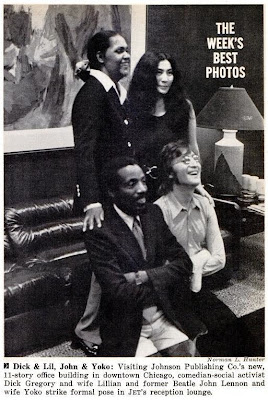 John and Yoko's busy spring of 1972 continued apace with another quick visit to Washington DC on May 9th for a private party attended by US Senators and other politicos sympathetic to the Lennons' immigration fight.
The next day, they flew to Chicago for a short promotional trip, taping a TV appearance on the nationally syndicated talk show, Kup's Show, hosted by local columnist Irv Kupcinet. After an in-depth discussion of their deportation case, John explained why his latest single, "Woman Is The Nigger Of The World", was being widely banned.
The controversial single was also a topic of conversation on May 11th when John and Yoko visited the Chicago headquarters of Jet magazine. The publication, aimed at an African-American market, assigned comedian/activist Dick Gregory to interview the couple, and he agreed with John's point of view that it was mostly white male disc jockeys who had a problem with the song.
John and Yoko returned to New York on May 12th for yet another court hearing, with several character witnesses testifying on John's behalf. The hearing was adjourned until May 17th, on which date John himself testified. On the street outside, David Peel and others showed their support in song.
On May 18th, WNBC reporter Pat Collins interviewed John and Yoko on the roof of their Bank Street apartment building, for a piece which aired on the following evening's news.
Posted by DinsdaleP at 3:37 PM