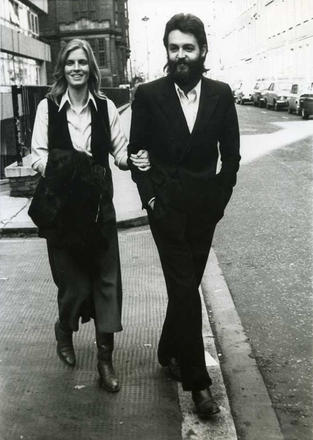 After spending most of 1970 in seclusion at home or in the studio, Paul McCartney found himself back in the headlines as 1971 began, thanks to the case he had filed attempting to dissolve The Beatles' partnership.

His first solo single (credited to Paul & Linda McCartney), "Another Day"/"Oh Woman, Oh Why", was released February 19th in the UK. That same day, he and Linda showed up at the opening day of hearings in the case, at London's High Court. Paul would testify in person on the 26th, and by March 12th, a ruling was made in his favour appointing an accountant, James Spooner, to manage all of the Beatles' assets until the partnership could be legally dissolved. This at least freed Paul from having Allen Klein control his financial destiny.

By then, Paul was in Los Angeles, putting the finishing touches on the Ram LP. He also made an unexpected appearance at the Grammy Awards on March 16th, accepting a trophy for Let It Be:

Meanwhile, John was spending February at his new home studio in Tittenhurst, testing the equipment and doing preliminary recording for the Imagine LP. The first fruit of these labors was the single "Power To The People", released March 8th in the UK. John did minimal promotion for the release, but did chat at home with Kenny Everett around the middle of the month for Radio Monte Carlo. As well as belatedly plugging the Plastic Ono Band LP, John danced his way around the subject of the court case, admitting that it had strengthened the bonds between him and George and Ringo.

Here is a fair quality off-line recording of the interview, broadcast at 1am on the morning of March 28th, as Radio Monte Carlo was about to shut down its English broadcasts for good. This is slightly longer and better quality than the version issued by Black Cat, but still pretty crummy.

Posted by DinsdaleP at 2:30 PM