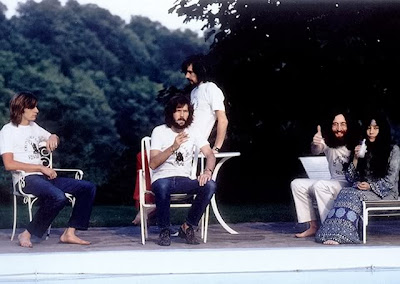 On September 12th, 1969, John and Yoko gave a joint interview to several journalists at their Apple office, discussing their recent film Self-Portrait among other topics.
At some point on that day, Canadian concert promoter John Brower managed to get through on the phone to Apple, and much to his surprise, convinced John and Yoko to appear the very next day at the Rock and Roll Revival festival being held at Varsity Stadium in Toronto. An impromptu Plastic Ono Band consisting of Eric Clapton, Klaus Voormann, and Alan White was assembled, rehearsed on the flight to Canada, and performed in front of 27,000 fans on the evening of September 13th.
The band spent the following day in Toronto and returned to London on the 15th, where John and Yoko were interviewed by ITV News about Yoko's unusual style of performing. On the flight back, John has already made up his mind to leave The Beatles, telling Allan Klein as much but not dropping the bombshell on Paul and Ringo until an Apple board meeting on the 20th.
Posted by DinsdaleP at 1:04 PM