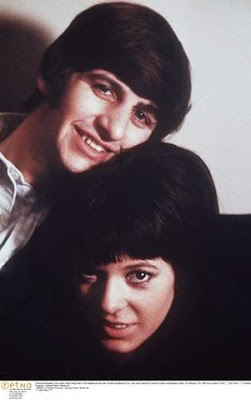 On the sixth day of 1965, Murray The "K" phoned London and spoke with Paul and Ringo, who were in the midst of their Christmas Show run. Paul commented on the latest iteration of the rumor that he would be marrying Jane Asher.
Murray didn't think to ask about Ringo's marital plans, but it turned out to be sooner than anyone imagined. Ringo and Maureen Cox were wed on February 11th. The next morning, the newlyweds faced the multitudes briefly; the event was covered in an earlier blog post, but here is an extra bit from a Reuters newsreel. The joining of the Starkeys led fans to speculate on George's matrimonial future.
Posted by DinsdaleP at 1:52 PM