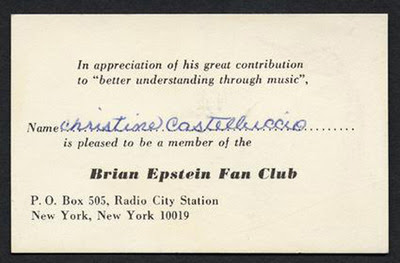 OK, it wasn't exactly Brianmania, but The Beatles' manager did have a high profile in the winter of 1964-65. He even had his own fan club for a brief time! In addition to the publication and promotion of his biography, A Cellarful Of Noise, Brian Epstein began taping inserts for the NBC-TV series, Hullabaloo.
From a studio in London, Brian introduced and occasionally chatted with British acts; on the weekend of December 19th, 1964, he interviewed Dick Lester about plans for The Beatles' upcoming second film. This segment aired in the 5th episode of Hullabaloo, broadcast February 9th, 1965.
Here is a newsreel clip of Brian being interviewed at a New Year's Eve party, looking forward to 1965. And while we're on the subject, here is a vintage recording of Harry Shearer reading an excerpt from Brian's book, from the 1969 KRLA documentary series The Chronicles Of Pop. Picture Derek Smalls reading the passage for added hilarity.
Posted by DinsdaleP at 4:45 PM