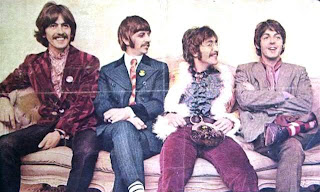 By request, here are more Kenny Everett-Beatle interviews for BBC Radio's Where It's At.
First, some Sgt. Pepper promotion from the May 20th, 1967 edition; the interviews may have been taped at the Pepper launch party the previous day, although that wouldn't explain George's absence.
Kenny also spoke with Paul the week following the Our World telecast, for the July 1st, 1967 edition of Where It's At. Paul reveals that he wrote a song for the occasion (possibly "Your Mother Should Know") which had yet to be recorded (thus it can't be "All Together Now").
Posted by DinsdaleP at 11:14 AM