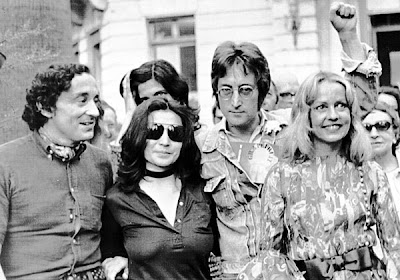 John and Yoko spent much of April and May 1971 tracking down Yoko's ex-husband Tony Cox and her daughter Kyoko across the globe. Their travels took them to France, to Majorca, Spain (where the couple were taken into custody briefly after "abducting" Kyoko from her school playground), and to Trinidad and Tobago.

They eventually returned to France on May 14th, this time to attend the Cannes Film Festival, where their films Apotheosis and Fly were in competition. On the 15th, they were interviewed by Pål Bang-Hansen for Norwegian television:

On May 17th, José Arthur spoke with John and Yoko for the ORTF TV show Le Grand Amphi, broadcast June 12th. And at some point during their stay, they recorded an interview for French radio (which unfortunately means most of their responses were buried beneath French translations).

Meanwhile, back at Tittenhurst, recording for Imagine was ongoing, with Phil Spector once again producing, and George Harrison sitting in on a few songs. On May 28th, John and Yoko took a break to record (and film for their own archives) a lengthy interview for BBC Radio's Woman's Hour, on the topics of love and sex.